Here are some reports from the teachers of each of our Humanities classes for the first two weeks of the Program. We have organized them by class:

On Monday, we began classes by discussing the Latin phrase on their t-shirts and what that meant in the context of this class and the program. This led into what the Latin and Greek languages were/are and why they were important to Western Civilization. They were given a Greek alphabet sheet as well as a list of ancient Greek names and their meanings. Their homework for the next few days was to choose a name from that list to be their own for the class. This usually leads to a discussion on\ etymology and the understanding of English words with Greek roots. Also this week, we delved into the pre-Greek culture; the Minoans and the Mycenaeans. We discussed their beliefs their structures and inferred a great deal about their lives by looking at the ruins and artifacts from the palace complex of Knossos. They understood that with a lack of written history, understanding archaeology and art history can help fill in the gaps. The Greek ‘middle ages’ discussion was dominated by the Iliad and the Odyssey and how that sets a standard for any epic tale or journey story for the western world even into modern society. We discussed the Greek hero and what were considered the most desirable traits for a Greek. They agreed that it was different from today’s standards. I quizzed them over this material with an Open Notes Quiz and was able to gauge their progress in composition with a free response worksheet. We finished the week by watching excerpts from the miniseries, “The Odyssey”, and discussing everything from its accuracy, the set design, to the ‘Hollywood’ changes.

We began the week by talking about the importance and the evolution of the polis. How did this change Greek society? How did the polis rise up in importance? The students also analyzed some archaeological evidence. We also had a test over the first week’s material of which I was very pleased. Next, we delved into the ancient Greeks viewed religion and how it differs from modern concepts of religion. These discussions led us into the polytheism of the Greeks; what we know today as Greek mythology. Of course, most of the student adored this part of the lesson.

For the second half of the week, we talked about the colonization of the Greeks in the Mediterranean and its difference from European mercantilism. The students loved our discussion over the polis of Sparta and how the Spartans fear and paranoia led to their military state. We also looked at history in Hollywood and how the subject fares in the medium of cinema. For homework they were asked to answer four critical thinking questions/prompts concerning Sparta. They had plenty to say on the subject.

We began the week with a discussion on what a utopian society is. Additionally, we discussed dystopias and the relationship between the two societal extremes. We read three short stories, “There Will Come Soft Rains,” by Ray Bradbury, “Harrison Bergeron,” by Kurt Vonnegut, and “The Lottery,” by Shirley Jackson. We discussed the types of societies and governmental structures in the stories. We talked about utopian/dystopian societies in history. I also taught them literary terms such as “foreshadowing” and “through line.” Next on our reading list is Fahrenheit 451 by Bradbury.

This week we delved further into Fahrenheit 451 and discussed themes of alienation and disillusion, as well the effects of propaganda and mob mentality. We questioned the motives of the main characters and speculated what happened in the past and what might happen in the future in the novel’s world. We did some comparative analysis between “Soft Rains” and 451 as both were written by Bradbury. I asked them to pick one sentence or phrase in the novel that felt or seemed most poetic and to write it on the board, after which we had a poem that complemented the novel. Next week, I’m assigning to write a one to one half page response to the book in which they explain what they think. We will also begin Lord of the Flies. 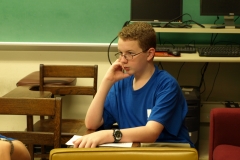 Bronson Jordan ready to leap into a discussion during Humanities II.

Generally, the students have been wonderful. They are certainly engaged in the class and have insightful comments to make about the texts we’ve been reading. We’re 100 pages into 1984.  We also read Donald Barthelme’s “I Bought a Little City”, which deals prominently with themes of tyranny, dystopia, and megalomania, though in a far less explicit (and arguably more artful) way than 1984. On Friday, they all presented on “I Bought a Little City.” Since this story is a bit more mature and ambiguous, I was a little concerned with how fully the students would understand it. However, almost all of the students were able to connect the story to 1984’s salient themes, as well as the class’s larger focus on utopia and dystopia. I am extremely impressed with the level of thought and self-expression the students have shown, both in these presentations and throughout the week during class discussions. Next week, the students will finish reading and discussing 1984, read, discuss and give presentations on Jorge Luis Borges’ “The Babylon Lottery”, and conduct a Kangaroo Court/Show Trial (postponed due to time).

During the second week of Humanities III, the class continued their lively discussion of dystopia.  The week began with a Kangaroo Court in which the class made false accusations against a single student, who happily volunteered to be put on trial. The point of this exercise was to imitate the arbitrary and illogical nature of judicial proceedings in failed states and dystopias. The class seemed to enjoy it and we will have at least one more Kangaroo Court during the semester. We spent Tuesday, Wednesday and Thursday continuing to discuss 1984 and comparing the world it depicts to other ‘real life’ and literary dystopias. I am impressed with the class’s grasp of history. Several students confidently compared elements from the novel to Ancient Sparta, Nazi Germany, Stalinist Russia and the North Korea of the present. On Friday, students gave short, individual presentations on the Jorge Luis Borges short story “The Babylon Lottery.” Borges is a complex, highly erudite writer who is concerned with metaphysics, and I was slightly nervous as to how well this story would be understood. However, based on their presentations, the students seemed to fully comprehend the story and its relevance to our ongoing discussion about dystopia. Ultimately, this is a discussion centered course, or literary seminar, and it is largely the students’ onus to provide for a stable, civil, and earnest intellectual environment. So far, they’ve exceeded all expectations.

GPGC gave me a sense of community,

a place where being smart was acceptable, where bullying was not the norm, and where creativity was welcomed.